Meet Erika. She is an inmate who is serving out her time in prison. She is a very special person with a heart for helping others. 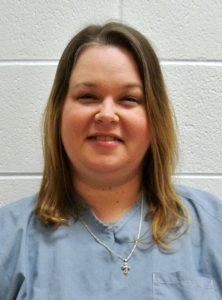 When I consider my spiritual journey, I find myself lacking in so many areas it is often easier for me to focus on my mistakes and not think about my journey at all. At the core of it all, I often still consider myself a lost cause. I know this is not true, but my journey is often thwarted by depression that I go through either on my own or only with those closest to me. My closest people have dwindled over the years because I still have serious trust issues.

Let me start with my mother’s death. It was Good Friday 2012 and my mother’s battle with breast cancer was coming to an end. She had been in a deep sleep, similar to a coma, for a few days. She had not spoken to anyone. When I called, I was put on speakerphone to speak with my mother or just to speak really. I told her how much I loved her and that it was ok for her to go. She was able to say “I love you” back, even if it was somewhat garbled. My brother said she was waiting for me to tell her it was ok to go. She passed away a couple of hours later and I felt as though my brain had an acid bath. I realized that day was due to God’s grace because normally my supervisor would not have been at work on a holiday and neither would the assistant at the Chapel, but for some reason they came in. I’ll always believe because of God.

Since then I have been making changes in my life. I slide downhill a lot but I keep trying to move forward. Because of my past, I am having a hard time seeing the good person within. I know that I have potential to be a good and decent person because of God’s grace. Only time will tell how proactive my spiritual journey will be.

Note: Erika’s Story and the posts written by her peers are part of our newest series of blogs, where we hear from our friends in maximum security prison. They are part of the Lipscomb LIFE program, an educational program that enables women who are admitted to earn an associate of arts degree in seven years.