The following sermon is read on Easter Sunday in Orthodox churches around the world. The congregation stands during the reading. John Chrysostom (c. 347-407), Patriarch of Constantinople, wrote the sermon. He was known as the greatest preacher in the early Church and was given the name “Chrysostom” which means “golden mouth.”

Read the text carefully and see which part of it stands out for you. There is so much richness in these few lines.

If anyone is devout and a lover of God, let him enjoy this beautiful and radiant festival.

If anyone is a wise servant, let him, rejoicing, enter into the joy of his Lord.

If anyone has wearied himself in fasting, let him now receive his recompense.

Enter all of you, therefore, into the joy of our Lord, and, whether first or last, receive your reward. O rich and poor, one with another, dance for joy! O you ascetics and you negligent, celebrate the day! You that have fasted and you that have disregarded the fast, rejoice today! The table is rich-laden; feast royally, all of you! The calf is fatted; let no one go forth hungry!

Let all partake of the feast of faith. Let all receive the riches of goodness.

Let no one lament his poverty, for the universal kingdom has been revealed.

Let no one mourn his transgressions, for pardon has dawned from the grave.

Let no one fear death, for the Saviour’s death has set us free.

It took a body and, face to face, met God! It took earth and encountered heaven! It took what it saw but crumbled before what it had not seen!

Christ is risen, and you are overthrown!

Christ is risen, and the demons are fallen!

Christ is risen, and the angels rejoice!

Christ is risen, and life reigns!

Christ is risen, and not one dead remains in a tomb!

For Christ, being raised from the dead, has become the First-fruits of them that slept.

To him be glory and might unto ages of ages. Amen. 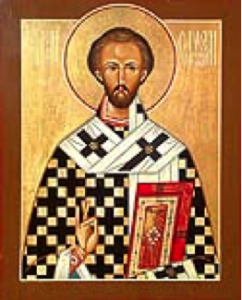 May God bless you as we celebrate the death, burial and resurrection of our Lord!

Peace and grace to you,